Will Green blazed to his fifth Sandy 10 title last Sunday, on a stunning day for running in the town. Green, from Serpentine Running Club in London, showed he has come back strong from an injury-hit couple of years to hold off strong challengers and reclaim the crown he had previously won from 2011-2013 and 2015.

While many saw in the arrival of British Summer Time recouping the hour of sleep they had lost overnight, hundreds of runners from across the region and beyond arrived early for this popular annual fixture on the roads from Sandy into Everton, organised by Biggleswade Athletic Club.

Marshals, resplendent in a selection of weird and wonderful hats – a tradition established on the race’s 25th anniversary four years ago – ensured smooth and safe running on a sunny yet cool morning in and around the town, as seasoned competitors rubbed shoulders with charity runners and first-timers.

Green’s time of 53m09sec was his second best effort on the course, and came despite having competed for his club the day before the race as part of a road relay. He said: “I was a bit unsure if it would leave me a bit heavy-legged but in the end it went very well. I felt really strong throughout and ended up only 10 seconds or so off the fastest time I ran here in 2012.
“The race was great. The weather was beautiful – if a bit windy in parts – and as always the organisation and support by marshals made for a very enjoyable day out.”

Rounding out the top three in the men’s standings were David Hudson of BRJ Running Club (54:44) and Steve Horton, from Bedford Harriers (55:02).

The women’s prize was taken by Rebecca Mayles from the Milton Keynes-based Redway Runners (1:03:49). Mayles, the 29th finisher overall, was tracked throughout by Wendy Webber, from local rivals Milton Keynes AC, who crossed the line 26 seconds behind in 1:04.15. Another Bedford Harriers athlete, Kirstie Sharman, took third in 1:05.01.

Overall race winner Green, who now competes in the MV40 category, also ended the day awarded with the Roger Wadeley Trophy for the best overall age-graded performance of the day. Wadeley, who died in 2010 after a battle with cancer, was a Biggleswade AC stalwart for over three decades, and a talented racer who still holds 11 club records, two of which date back to the 1970s. Speaking of the accolade, his first age-graded award at the Sandy 10, Green said: “I was particularly pleased to win Roger’s trophy – I know how important he was to the club.”

All finishers received a souvenir technical T-shirt, featuring the slogan: ‘”Run 10 miles” they said … “It’ll be FUN!” they said.’ Once again the race supports the St John’s – Sue Ryder Hospice in Moggerhanger, who will benefit from the surplus race proceeds – since 2010 the hospice has received £10,750 from race organisers. For its 2017 running the Sandy 10 received vital sponsorship from returning partners Marshalls of Sandy, Tesco Sandy and The Barns Fitness Studios, Potton. Officers from Bedfordshire Police were an invaluable part of the organisation, lending support and a visible source of reassurance to marshals and runners at key points of the route where competitors crossed over open roads. Also on hand were Heart Services, who provided first aid cover. 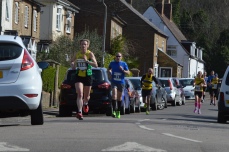 Back through the sandhills towards the final mile marker. Photo: Stuart Goodwin 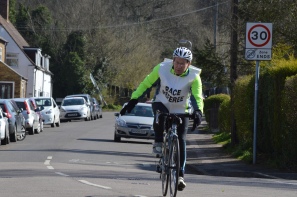 MP Alistair Burt, himself a keen runner and former Sandy 10 entrant, started this year’s race and handed out the prizes. Afterwards he said the event is “always one of my best days of the year. Superb organisation from a great club.”