It was yet another successful London Marathon for the runners of Biggleswade Athletic Club with six of the ten runners finishing in under 4½ hours. END_OF_DOCUMENT_TOKEN_TO_BE_REPLACED 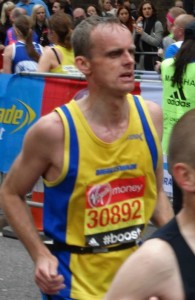 Once again Biggleswade AC had a number of athletes running in the London Marathon last weekend.

Giles Hawthorne, Andy Hedley and Cat Marriott were the lucky(?) winners of the draw for the three club places, with Paul Davies, Paul Cooke, Chris Clarke, Gary Albon and Nigel Pavitt securing their places via the public ballot and the charities.

Fortunately the warm, spring weather that most of the country had been experiencing lately, did not materialise and the conditions could be described as perfect for running 26.2 miles. The same couldn’t be said for the teams of club supporters who had to endure light rain and cool winds as they waited for their club mates to appear.

First past the small group of club supporters at mile 13, was Paul Davies with Paul Cooke a few minutes behind him. Behind them Giles was running at a blistering pace but still managed a smile as he headed passed his very enthusiastic club colleagues on Narrow Street. At around mile 21 Chris Clarke, in his first marathon for 10 years, was looking as fresh as a daisy. It’s at this point when cramp and fatigue set in, and the temptation to stop and chat is overwhelming, but when Andy Hedley trotted past he had no time for his club mates and headed on towards The Thames Embankment, Westminster, The Mall and the finish line.

On the day there was some superb, gutsy running from everyone. Paul Davies was actually placed 859th out of a total of 38,000 runners overall and marathon woman, Cat Marriott, was 85th in her age category. There were also new personal best times for Paul Cooke and Andy Hedley so all in all a pretty successful day.