The ladies of Biggleswade Athletic Club continued their astonishing run of off-road success across the region, coming away from the Bedfordshire County Cross Country championships at Shuttleworth College with a host of individual team prizes. Not to be outdone, a couple of the men joined them with gongs of their own.

As well as scooping top honours in both the senior/veterans and standalone veterans team standings, Elaine Livera (second across the line overall) was first senior finisher, Isobel Everest (fourth overall) first in the V45 category and Hannah Broom (fifth) was the first V35. In sixth, Natalie Morgan was the second F40 over the line, while 10th-placed Hannah Ridley was just two off making the top three in the seniors rankings. And all this in spite of mild controversy over the length of the course, which caught many competitors off-guard.

Elaine said: “By the time we had completed one lap of the run, I was quite surprised to see that we had already run over 3km – it was at that moment that I heard team-mates warning me that the course was, in fact, about 10km long instead of 8km! It was also at this point that the wind picked up, preventing us from making the most of the only downhill segment) and the rain started up.

“I followed the tips given by coach Paul Davies – run like I ran at the St Neots half-marathon. Don’t get too puffed out in the first half of the run to make sure you can finish the race properly. By this point the girl in first position was quite far ahead, so I focused on catching the two girls about 300m in front of me. By maintaining an OKpace I slowly managed this and overtook the 2nd girl on the 3rd attempt at the killer hill. From here I knew it wasn’t too far to go and counted down the distance by 100m segments. Everyone ran their bums off and it was so worth it! We got a brilliant haul for Biggleswade AC!”

Hannah found herself in a battle for top V35 honours. She said: “I went out hard and got into a good position, keeping Izzy in my sights. Keeping a steady pace I overtook two girls early on in the second lap, and there was now only one girl between me and Izzy, but she was a way off. I kept going as I was and slowly I began to catch her. As I went passed coach Paul he told me I had opened a big gap behind, so I wasn’t under pressure. I was now closing in on the girl in front. It was the final lap, the big hill, and she slowed. I overtook her but I couldn’t push on the down and I heard her chasing, coming back at me. I was powerless as she overtook me as we made a sharp turn to the left.

“I made a plan, she was tiring and hills were not her strength but they are mine, I felt strong and I gathered myself and prepared for a tough finish. I had to push over the next hill and overtake her but then I had to keep pushing at a faster pace for the finish. It was about half a mile of really hard running, across mud and some smaller sharper hills. I launched my attack and overtook her on the hill, I powered down the other side and just kept going, I had no idea if she had come with me! My lungs were on fire, my legs were burning …where was the end?! Finally the finish and I had done it … fifth Bedfordshire female home, I had retained my first FV35 status, we were team champions again. It was the best race of my life to date – I totally loved it. Huge huge thanks to the support crew and marshals, it totally made the difference to me out there.” 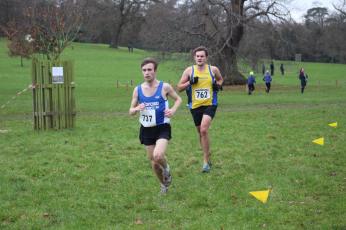 On the mens side, Jamie Hall was ninth overall, in 51:09. Meanwhile, bookending the podium in the over-60s races were Charlie Arnold, just under eight minutes clear of the athlete in second place, while Chris Clarke emerged victorious in a close race for third place with a Dunstable Road Runners athlete.

Charlie said: “Tackling the steep slopes and the dash downhill made it impossible to keep a consistent rhythm, but the thought was always to keep pressing on as the legs got heavier and heavier. There was great support from BAC members around the course, and those marshalling helped tremendously and kept my focus on the race. Finally, lap three was finished and my turn to filter towards the finishing line with great relief.”

In the combined senior and veteran womens team standings, which see each club’s first three finishers have their results stacked together, BAC’s trio of Elaine, Hannah and Natalie finished in 2:15:18, over 15 minutes clear of Leighton Buzzard AC in second place.

In the junior 4k races, Caitlin Allen was fifth under-15s finisher in 19:43, while on the boys side in the same age group Elliott Swinburne was eighth, in exactly 18 minutes. The seniors now move on to the final Three Counties XC match of the season, hosted by BAC at Priory Park in Bedford on Sunday, where the womens team are away and clear in pole position at the top of the league.