Biggleswade Athletic Club’s annual Fairy Run delighted locals and bemused unfamiliar visitors to the RSPB headquarters over the festive period, as 41 runners in fancy dress embarked on a time-trial around The Lodge.

The seasonal staple sees members take up wands and strap on fairy wings, with honours available for both the Fastest Fairy and Best Dressed Fairy. Chairman Damien Pitts allotted a handicap start time to each competitor, based on performances over the year, with the intent of levelling the playing field.

However overindulgence over Christmas, some lingering injuries, as well as some laughably impractical costumes gave some slower runners a chance, while relegating faster entrants towards the back of the pack, unable to make up ground.

With the closing stages taking in the steep trudge uphill at the end of The Lodge near Biggleswade Common, mince pies and nights out caught up with several entrants, while mutterings were also voiced about the quality of the handicapping, with eyebrows raised in particular at the kind handicap the chairman had given himself.

Best Dressed honours went to Charlie Arnold, whose ensemble, Pirate Fairy Piggybacking on a Leprechaun, was a clear winner of the vote, held during a lengthy post-run debrief at the Sir William Peel pub. Second place went to Kathryn Juty, sporting a more elegant number – Traditional Fairy – but hampering her own chances with an eye-popping wingspan that was far from aerodynamic, even if it did make overtaking her almost impossible on all but the widest sections of the course. Fastest Fairy honours went to Steven Baldwin, whose time of 18:34 pipped Marcus Davey by just three seconds.

Charlie said: “I soon found myself falling behind the pace as my tight and cumbersome costume added to the handicap as I trundled down the hill. At least the encouraging beeps of passing motorists made me remember it was all for good fun.

“Along Stratford Road, fairies were passing me and, with a chuckle, offering further encouragement. The best quote was passing an applauding member of the public who took one look at me and proffered: ‘I bet you’re regretting that costume now!’

“Plodding on, step by step, I was preparing myself for the climb up the final hill. Determined to keep going to the end I soldiered on and was relieved to reach the top, and stumbled along the final few yards to the finish. Pleased to finish, but a great occasion and, and then off to the pub for a well earned drink and buffet.” 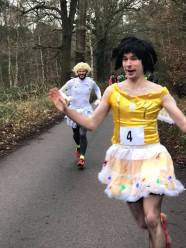 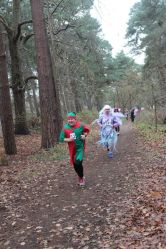 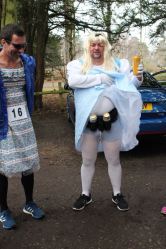 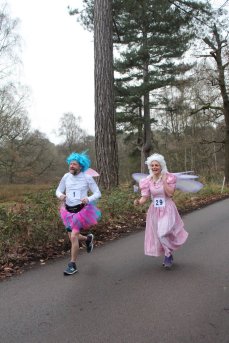 BAC member Carol Garratt said: “The majority of the boys all showed real enthusiasm for donning tights, dresses and on inspection of the photographs close up, nail varnish!

“As an observer I felt this more than any other event I’ve been involved in or watched demonstrated the great camaraderie and fun of the club, although having said that, tactics were still being discussed which to be honest couldn’t really be taken seriously when those involved were sporting sexy little numbers and flowing wigs!”

Rachel Stott added: “This was my first Fairy Run, and had been looking doubtful due to injury. However, I managed a run/walk with Helen Steward, so we set off first. The first few minutes were hard but we soon settled in to our first running part of the day. It was great to be a part of it, the cars tooting as we went by and to see the people cheering us on. The quote of the day from one gentleman was: ‘It is better to fly, than to run.’

“It was an amazing day. I really loved being with all of my running buddies and seeing the brilliant outfits.”

The tradition dates back to the early 1990s, with roots even further black, as former BAC chairman Nigel Bush explains: “The 3-mile Christmas handicap around the RSPB loop started in the 1980s and originally started and finished along Stratford Road near the cemetery – extended to just over the full lap to make it 3 miles!

“In 1991 Roger Wadeley and I had London Marathon entries but both had injury problems during training so we decided to dress in fancy dress as we were not in shape for PBs. A tutu, wig and wand seemed like a good idea as these outfits didn’t restrict the running action. Our aim was to run together, enjoy the event, try to break 3 hours and be the first fancy dress runners to finish. Things didn’t quite go to plan. A green dragon passed us at 24 miles and we finished in 3hrs 0mins 25sec. I’ve still got the finish line photo hanging on my wall as a memory of Rog.

“The following Christmas we decided to run the handicap in our fairy costumes and the whole thing caught on from there!”

BAC, as always, thank the RSPB for their support of what is always one of the club social highlights of the year. Thanks also to all of hostelries of Sandy and Potton for their hospitality, and apologies for any extra vacuuming required following our visits. One of Biggleswade AC’s core values is in taking your glitter with you when you leave.