There were some fantastic results from Biggleswade athletes at the Biggleswade AC Throws Fest on the evening of Thursday 6th August.

Huge congratulations must go to Biggleswade AC’s Craig Brown who achieved a new personal best time of 34mins 32secs, and 8th position, at the Self Transcendence 10K at Battersea Park last Saturday, despite suffering leg cramp during the race.

And a bit of friendly rivalry enabled Paul Cooke and Nick Haworth to break the 18 min barrier at the Battersea Park Self Transcendence 5K last Monday evening, with both athletes recording new personal best times of 17mins 58secs.

There were some excellent performances in the final match of the Eastern Veterans Track and Field League at Bedford International Stadium, with athletes digging deep in search of valuable points for the club.

On the men’s side, Biggleswade AC went into the fixture placed fifth in the league table, needing to overturn a 14-point deficit to overhaul Luton AC, situated one spot higher.

The evening got off to a great start as Robin Wynde took a brilliant first place in the 2km walk.  In difficult conditions for race walking, Wynde maintained great form throughout and took the win by a gap of almost seven seconds.

Biggleswade’s other big winner on the night was David Brown, who had a busy time combining officiating and competing duties.  Brown took the honours in a highly competitive V50 800m, where the five athletes competing were separated by less than five seconds in a frantic finish.  In addition to a valuable six points for the win, Brown also bagged his best time since May 2012. He later added a fourth place in the 200m.

Ian Skerratt ploughed on despite injuring himself in an early attempt in the V60 high jump, and his third place earned a vital four points.  Chris Addams and John Haines took two and three points respectively in the V50 and V60 2000m, with Haines also taking four points for his third spot in the discus.

Stuart Goodwin endured a punishing night, competing in six events in 90 minutes, including a frenzied spell where his simultaneous participation in the high jump and discus was punctuated by track outings in the 200m and 2000m.  For his trouble Goodwin earned a string of season’s best, while racking up more useful points for the club.

The evening was rounded off with the 4x200m relay, and Biggleswade AC’s men took an excellent third spot to cap off a successful night’s work which saw them not only reel Luton in, but take fourth place with an eight-point cushion to spare.

A depleted women’s team were unable to improve on last position in the six-team league, but those present put in some fine performances.

Lindsay Lister took second place in the V50 800m in a season’s best time, while Zoe Luscombe took fourth in the V35 equivalent.

Julia Mackay, having to contend with the worst of the evening’s rain, took fourth place in the V50 discus and fifth in the javelin, both with personal best performances.

This year’s Sandy 10 road race, held on 12th April, was once again a huge success with over 600 entries, and this has enabled race organisers, Biggleswade Athletic Club, to donate £1,200 from the race proceeds, to the Sue Ryder hospice at St John’s in Moggerhanger.

The cheque was formally presented to St John’s Regional Fundraiser, Fay Boissieux, at a special ceremony held at the athletics track in Sandy on Tuesday 28th July.

Biggleswade AC have a long tradition of donating surplus race proceeds to charity, the club has now given more than £23,000 to local causes.

The provisional date for next year’s Sandy 10 is Sunday 10th April so make sure you put the date in your diary.

Biggleswade AC hosted the final match of this year’s Youth Development League for young athletes aged under 17 and under 20. The match was held at the athletics track in Luton in, what can only be described as, monsoon weather conditions.
Despite having to endure hours of constant rain, the team finished the day in 2nd place (4th place over all in the league).
The were some notable performances from a number of individuals; Hannah Ridley finishing in 1st place in the under 20 women’s 400m, whereas Morgan Webster and Bradley Strong both managed new personal best times in the under 17 men’s 400m.
Again, more PBs from Jamie Williams and David Lee in the under 20 men’s 800m and 1500m respectively. Callum Dickson-Earle enjoyed a comfortable win in the under 17 men’s 100m hurdles, and Cybil Laobena achieved further success in the under 17 men’s 400m hurdles by finishing in 2nd place and narrowly missed out on a new PB in the pole vault. Rebecca Lee recorded two new season’s best results in the shot put and discus with a new personal best in the javelin.
Recovering from injury, hurdler, Euan Dickson-Earle added shot put, discus and hammer to his list of athletic achievements. However, younger brother, Callum, had to settle for 2nd place in the discus and the hammer yet still succeeded in gaining a new personal best score in the hammer.
A huge thank you to all those who officiated and helped out. 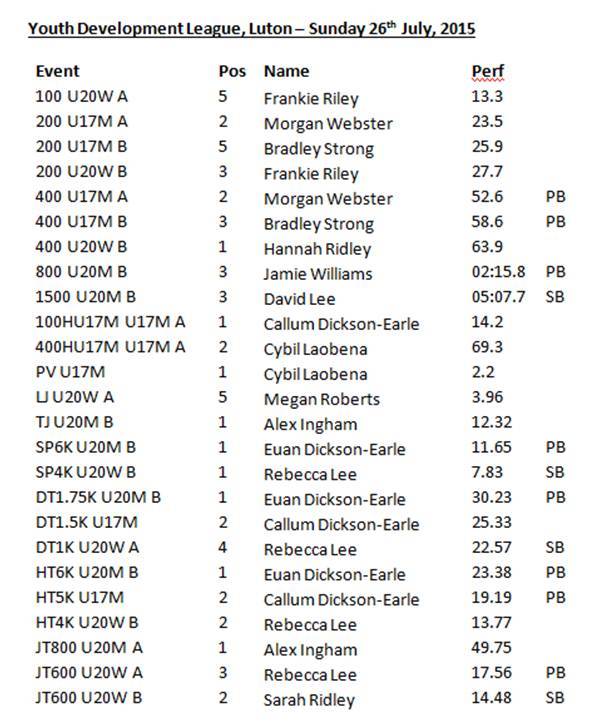